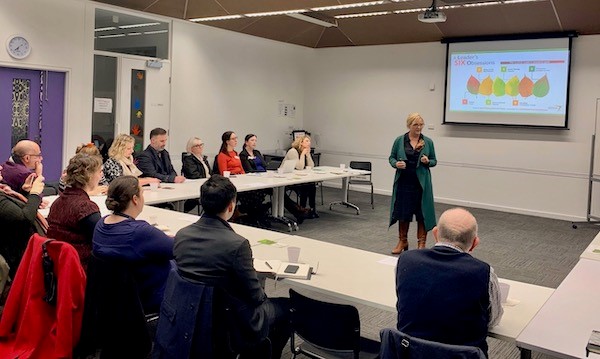 Our ODA community gathered on a freezing cold Melbourne May evening to speak with ‘People for Success’ founder, Kristyn Haywood, about leadership, trust, and courage.

Kristyn has a strong reputation as a leader whisperer, and her self-described “quirkiness” is immediately disarming. She is an experienced facilitator and executive coach, using her skills and learnings for leadership education and transformational business consulting.

Kristyn’s passion for her new program A Leader’s Six Obsessions was immediately evident. The program works to foster leadership mindsets and behaviours that build “energetic, passionate and focused teams.”

We flew through a number of heavy-hitting references and influences of Kristyn’s work; spotlighting Brene Brown’s work on trust and courage. Other notable researchers and inspirers included Patrick Lencioni, Stephen Covey, Simon Sinek and Marshall Rosenberg.

According to A Leaders Six Obsessions, a true leader’s obsessive quest includes the following:

Delving into the first obsession, Foster Trust, we started with a go-deep-quick get to you know you. Kristyn took us through this activity with the challenge to spend more “circle time” with each other and our teams, at the start of meetings and workshops. Building trust is an essential foundation for strong teams in a modern business environment. There was a general consensus that getting personal and deep with a group can be incredibly powerful, and that the level of depth and extent of success rests largely with the facilitator’s comfort and capability, and willingness to be vulnerable.

Brene Brown’s Seven Elements of Trust ‘BRAVING’ asked us to examine our emotional intelligence and trust behaviours. Kristyn (and members of ODA!) recommended Brene Brown’s Netflix special as a great resource to engage with for anyone investing in their learning in this area.

Effective leadership is a topic that ODA has returned to many times, and will continue to explore. The demands on leaders are in constant flux. Kristyn, and those like her, see this as an opportunity to examine and hold fast to core values of organisations, teams, and individuals.

ODA Members can view the slides from Kristyn’s presentation here.