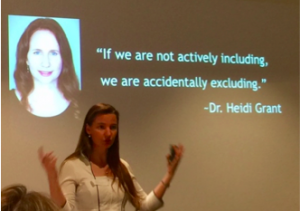 An engaging discussion lead by Anneli Blundell author, speaker and communication expert (aka the People Whisperer!). Anneli is the author of ‘Developing Direct Reports’ ‘Insight to Action’ and ‘Cracking the Code’ and has recently published her whitepaper exploring issues of gender equality and the invisible barriers within organisational and social constructs.

There is no doubt the conversation surrounding gender equality is a topical, frequent flyer making many arrivals and departures of the news and political forums. In the session the group explored and debated issue of gender equality within the workforce, the parallel perceptions of behaviours and intent between men and women and brought hidden barriers and unconscious bias to the forefront.

Anneli passionately guided the group through her wealth of knowledge gender equality and the barriers affecting women in leadership, using analogies to bring to light five robust themes of discussion, which were then posed to the group.

The themes are as follows:

By the end of the session, several epiphanies around the room were shared and a challenge was set to all participants to be more mindful of socially ingrained gender biases within our cultural conventions and to proactively assist in the deconstruction of hidden barriers which create disparity.

In the spirit of Anneli’s thought-provoking presentation and the topic of gender equality, we leave you with this question:

What do Iceland, Finland, Norway, Sweden and Rwanda have in common?